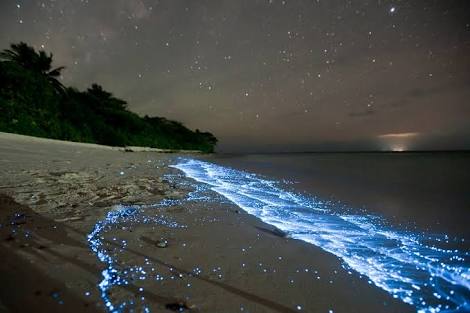 Many of you may remember the scene in the film “Life of Pi”, where the entire sea is lit up as if a thousand small led bulbs have been put on beneath the sea. This is actually true. At certain places you can witness a sea of light – the phenomenon is caused by micro organisms that emit light. The spectacle occurs when phytoplanktons (microscopic marine plants), commonly known as dinoflagellates, produce light through chemical reactions in proteins, say researchers.

These bio-luminescent beaches have been seen all over the world (Maldives, Vietnam, Indonesia, USA, Australia etc..) and (hold your breath) India. The Central Marine Fisheries Research Institute (CMFRI) confirmed that the occurrence of bioluminescence – emission of light by marine organisms – has been observed at several coastal areas this year. Recently, this was spotted at Juhu beach in Nov 16 and Kelshi, Ganapati Pule beaches in Jan 17.

This can be due to several factors for the occurrence but one of the main factors could be eutrophication – the reduction of oxygen in the water, which makes the phytoplanktons pretty dominant. A sample of the water needs to be analysed to check the exact cause of the blue tide. This has been spotted along the Indian coast with increasing frequency,” says E Vivekanandan, consultant and scientist, CMFRI.

“Microorganisms called dinoflagellates are related to amoeba and paramecium. They have enzymes in their body with which break down certain organic substrates and this gets emitted into light,” says Dr Parvish Pandya, vice-principal and associate professor, zoology, Bhavan’s College. “The light is produced when the organisms are churned or mechanically stimulated, for example the light spreads further when waves surf up along the rocks.”
He adds that there are two main theories for this phenomenon. “The first being that this helps these organisms gather together and make colonies and second being that the light helps dissuade or alert predators,” says Pandya.” 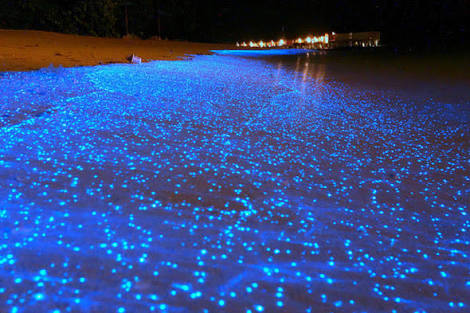 Locals call the fluorescent occurrence as ‘neeli machli’ (blue fish). They claim that it is not harmful and if one puts their hand into the water, it starts glowing.

Similar to the blue tide, there exists another such phenomenon called red tide or harmful algal blooms that emits red light. It is rare occurrence caused by colonies of algae—simple plants that live in the sea and freshwater—grow out of control while producing toxic or harmful effects on people, fish, shellfish, marine mammals, and birds

“While making the light this organism secretes a chemical which is toxic and kills fish in the area the light emerges and are known to occur near the Florida gulf coast. However, in Mumbai’s case, the blue light is not toxic and has maximum transmission in water that helps reach maximum distance,” says Dr Parvish Pandya.

How to spot it

While bio-luminescence has been spotted at many beaches across the world, what makes the sight rarer is its complete lack of predictability. So if you are lucky, you may walk down one of the beaches at around 9:30 pm since these are visible under a dark sky and the lights get submerged once the high tide sets in.

It may be better to stay away and enjoy the view from a distance although the locals claim otherwise. Better safe than sorry.